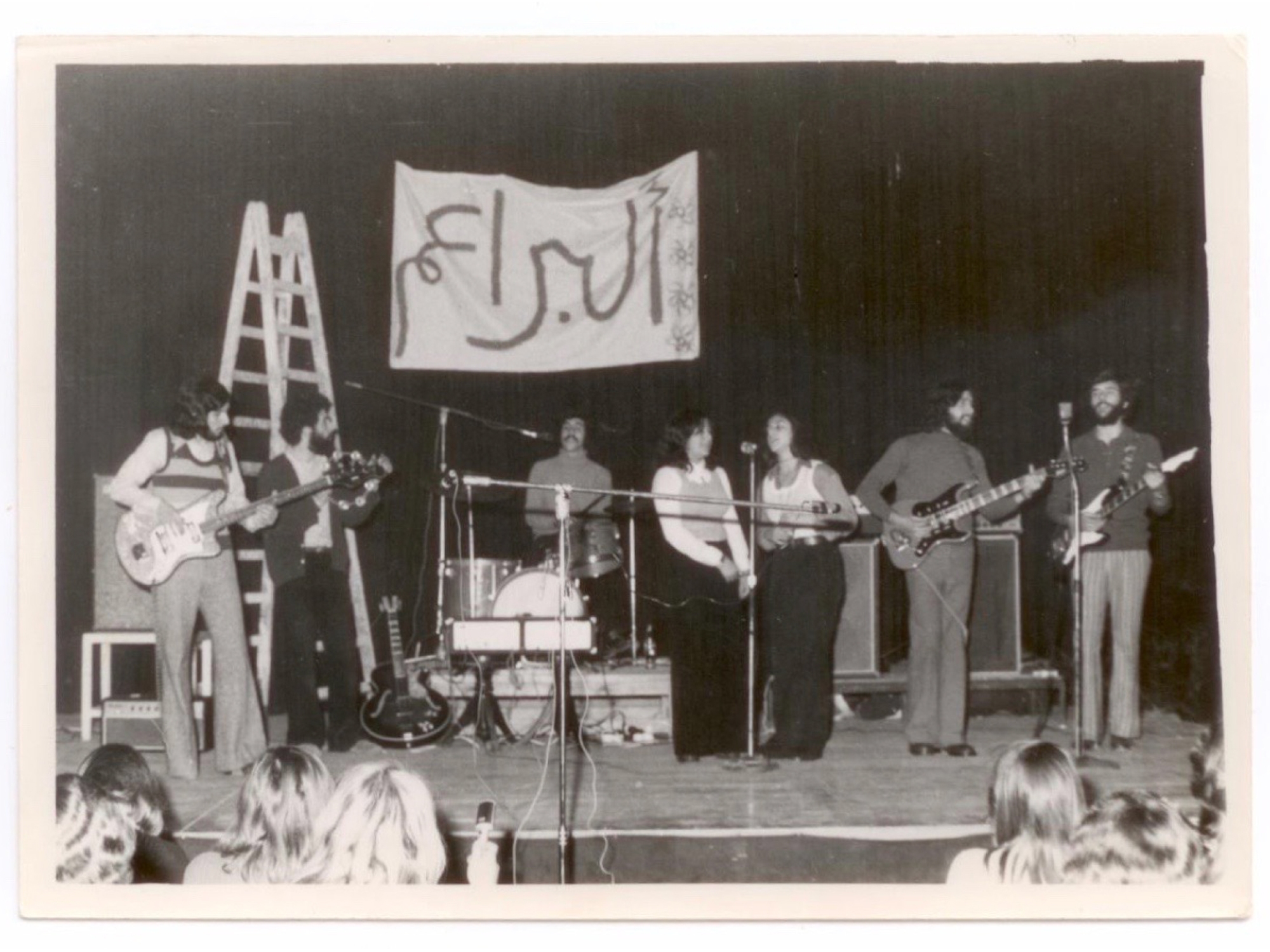 “I was immediately fascinated with the image of my father fronting a band,” admits Sama’an Ashrawi, a young podcaster and director from Texas. “But I never thought there would be any recordings, and I wouldn’t find out for several years that there was original music.”

If you’ve ever wondered what it would be like to discover your family had formed one of Palestine’s first rock and roll bands, talk to Ashrawi. His father Ibrahim and all but one of his aunts and uncles were founding members of Al-Bara’em (The Blooms), a cover-band-turned-psychedelic-rock-group that played to packed venues across Palestine during the 60s and 70s. A fact he was relatively unaware of for most of his life.

“At a family gathering a few years later, either Thanksgiving or Christmas, one of my uncles told me that recordings existed,” says Ashrawi, who is arguably best known as the founder of The Nostalgia Mixtape podcast. “In that moment it became something very sacred to me. It was bigger than our family history, it became immediately clear that it was Palestinian cultural history. People needed to know about this.”

Since then Ashrawi has been on a journey of discovery, tracking down recordings and photographs, digging up old compositions, and rummaging through newspaper cuttings in a bid to find out as much information about the band as possible. Much of the material he has so far unearthed, including a letter from the UN requesting the band perform at its headquarters in Jerusalem, was discovered during his first trip to Palestine in April last year.

During that trip Ashrawi travelled across the West Bank with his uncle Emile, who still lives in Palestine and had heightened his nephew’s interest in Al-Bara’em through the sharing of old photographs. Together they visited roughly a dozen venues the band had once performed in, including a 900-seat theatre in Bethlehem, and uncovered photographs of a sold-out performance at the Jerusalem YMCA in December 1973.

“Walking around Ramallah, I felt at home in a way I’ve never felt in America, even though I was born and raised here,” admits Ashrawi, who also works as a music writer. “That trip was very soul-confirming to me. So many of us spend years searching for our true calling, and on that trip I fully realised that this project is one of mine. Just an incredible moment of self-actualisation for me.”

Originally one of a handful of homegrown Palestinian rock and roll cover bands, Al-Bara’em’s line-up consisted of five of the six Ashrawi siblings: Alexandra (vocals), Emile (drums and vocals), Ibrahim (lead vocals), Samir (lead guitar and vocals), and Samira (vocals). The sixth sibling, Naifeh, was the eldest and was married before the band took off. A rotating line-up of friends, including Ayleen Rizeq, David Sa’adeh, Francois Farah and George Qurmuz, shared the stage, with the band eventually progressing to rock-infused covers of Fairuz and ultimately to writing and producing their own songs in Arabic.

“The precise ‘when’ isn’t quite clear, but it was certainly after the Israeli occupation of East Jerusalem in 1967,” says Ashrawi of the band’s switch to Arabic. “After Black September in 1970, it is my understanding that Al-Bara’em became fully committed to performing original Arabic compositions and were the first to do so. I think that dancing to The Monkees just wasn’t cutting it any more. As Nina Simone once said, ‘an artist’s duty is to reflect the times’.”

“Their lyrics were absolutely political,” replies Ashrawi. “But rather than chanting slogans, they preferred the imagery that poems conjured.”

Poetry looms large in the music of Al-Bara’em. The first song to be released, Tareeq, which hit Spotify and other streaming channels in January, was inspired by the poet Jibreel Al-Sheikh. The second, Tha’er, which was released this week, is a psychedelic rock and roll track set to Mahmoud Darwish’s On Wishes.

“Tha’er has an interesting history,” explains Ashrawi. “Samir and Emile were the main songwriters of the group. Samir left for the States around 1974, and, without either of them knowing, Samir and Emile both wrote music to the same poem. Emile wrote his version in a minor key – and we do have a live recording of Al-Bara’em performing Emile’s take, which will be released when the time is right – and Samir left for the States, writing his in a major key, and that major key version is the one you hear in this release. It’s so cool to know they both had the same idea without the other knowing. Another Palestinian band, Sabreen, put the same poem to music in the 1980s, albeit in a more traditional Arabic style.”

However, not all of the band’s songs were influenced by poetry. Some were entirely original, although no studio recordings of those songs exist. In fact, one of the only reasons Ashrawi has access to Tareeq and a handful of other songs is because Samir was able to record them in the US some time in the early 1980s.

“Personally, I like to compare their music to Eric Clapton’s band Cream because it’s poetry set to psychedelic rock and roll,” says Ashrawi, who was gifted the psychedelic rock compilation Waking Up Scheherazade by his cousin at roughly the same time he first learnt of the band. “Just like Cream, Al-Bara’em understood the importance of the guitar solo and had epic movements in their songs. In other words, the songs aren’t just verse-chorus-verse-chorus, there’s a higher concept to their music that is just absolutely fascinating to me. The difference between Cream and Al-Bara’em is, Al-Bara’em’s music was a window into their reality rather than an escape from it.”

Originally from Nazareth, Ashrawi’s grandparents had moved to West Jerusalem after their marriage but were forced to flee to East Jerusalem during the Nakba. It was there that Ashrawi’s father was born in a church basement. The family would remain in East Jerusalem, with the siblings also becoming founding members of one of Palestine’s first youth theatre troupes, Al-Balalin.

The band remained active until 1976 but four of the six siblings would eventually emigrate, bringing Al-Bara’em’s contribution to Palestinian cultural life to an end. “It is sweet to dream about what they might have become had they not lived under occupation,” admits Ashrawi, who is also filming a documentary charting the band’s history and his own journey of discovery.

“There are also a number of original Al-Bara’em compositions that were never recorded because of the situation. My understanding is that many of the recordings on the compilation my cousin gifted me were made in Lebanon or Egypt, but because Palestinians lived under an illegal military occupation there simply was no record industry. We are hoping to raise enough money to hire young musicians to record their music, under the supervision of my uncles, and release those recordings as an album. I’m so grateful, mashallah, that all the members of the band are still alive, and that’s what makes it even more urgent to get the full story of the band out as soon as possible.”